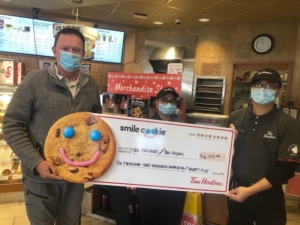 The campaign, which ran from September 14 – 20, saw the full $1 from every freshly baked chocolate chunk Smile Cookie purchased to support mentors and mentees engaged in community-based and couples matches, in-school mentoring, as well as virtual mentoring programming.

“We feel very privileged to have Innisfail support this campaign so strongly this year, especially given the current circumstances,” says Rob Lewis, Executive Director of Youth HQ. “Quinn and his team give so much back to the community and we’re honoured to be able to continue to receive the support from his restaurant to support our matches here.”

This is the third year the Innisfail restaurant has supported BBBS programming through the Smile Cookie campaign. Last year’s campaign raised over $5600, with the 2018 campaign raising almost $4900 for Big Brothers Big Sisters mentoring programs.