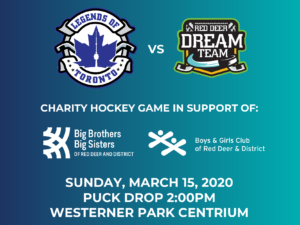 “We are thrilled to be welcoming former players of the Toronto Maple Leafs to our city. There are a lot of Toronto fans here in central Alberta, so to get to put together this event is a real treat,” said John Johnston, Community Engagement Manager for Youth HQ. “This is a family-friendly event, and it’s going to be a great time for folks who love hockey as well as those looking forward to seeing some of the greats.”

So far confirmed players for the NHL Legends of Toronto team include Al Iafrete, Andrew Raycroft, and Colton Orr. The Legends team will be coached by former NHL forward, NHL head coach, and current Innisfail Eagles Head Coach Brian Sutter. They will face off against the Red Deer Dream Team, a community team of like-minded hockey enthusiasts pledging to play and ultimately raising money for two great causes. Youth HQ is currently looking for 4 players to play on the Red Deer Dream Team.

VIP ticket packages are available for the game, which include the opportunity to meet Legends of Toronto players between periods and attend a post-game banquet hosted by the Black Knight Inn. The banquet will feature dinner, live auction, and more – coming full circle and making it a night to remember for any hockey fan. Game tickets start at $15 for youth and $25 for adults. Tickets went on sale October 2nd at 10:00am and are available through Tickets Alberta.