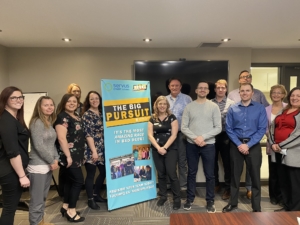 Red Deer’s most amazing race is back again for another year! Big Brothers Big Sisters of Red Deer and District launched their pledging campaign and announced this year’s edition of The BIG Pursuit at SERVUS Credit Union’s South Hill Branch today.

The BIG Pursuit, the cornerstone fundraiser for Big Brothers Big Sisters of Red Deer and District, will occur on Sunday, April 26 and hopes to raise $50,000 to support community-based programming as well as in-school mentoring programs in Red Deer and other central Alberta communities it serves. Last year’s edition of the Amazing Race-style fundraiser raised $43,000.

“This is the fourth year of the event, and it just gets better year after year,” said John Johnston, Community Engagement Manager for Youth HQ. “Our committee has been working hard to create unique challenges and checkpoints that are going to impress all our racers.”

Teams of 4 will start the race at the Quality Inn, then travel to a variety of checkpoints around Red Deer, all of which are top secret until Race Day. Teams may find themselves solving a riddle or puzzle to take them to a destination, looking for something or someone, singing a song, or playing a game. They will then return to the Quality Inn once all challenges and checkpoints are completed, hoping to be the fastest teams to return. Prizes are awarded for the top teams and fundraisers. Prizes donations are made possible through the tremendous support of local community and event sponsors.

Big Brothers Big Sisters of Red Deer and District is also very grateful to have the support of our Presenting Sponsor, SERVUS Credit Union. SERVUS Credit Union has been a supporter of the primary fundraising event for the program for 15 years and enters teams from each local branch in the central Alberta area to raise pledges and participate in the race.